A Man, Some Apples and a Dream to Change the World
​Written by Cheyanne Mumphrey, Grace Fenlason and Kat Timmons
​

​There are trees everywhere, the air is crisp and it smells like a freshly-made apple pie. One could think this is a relaxing countryside; however, there is work that needs to be done — apples that need to find their purpose. Whether it’s for selling as organic whole fruits or pressed into cider, Brian Maisenbacher is one of the few that work at Garland’s Oak Creek Lodge as an orchardist or as some would like to call an apple caregiver.
“My mission is to grow the highest quality organic food and distribute it locally and raise food awareness in my community,” Maisenbacher said.
Rob Lautze, the current primary caretaker of the lodge, was solely responsible for transitioning the orchard from conventional growing practices to strictly organic. Maisenbacher is currently in training with Lautze to become the main orchardist, so Lautze can retire. Lautze has been the primary caretaker of the Garland's Oak Creek Lodge Orchard for the past 25 years. 2017 will be Maisenbacher’s first season as the predominant orchardist.
The 22-year-old was born in Springfield, Illinois. He remembers spending his childhood climbing  in the fruit trees near his house and playing catch with apples. Maisenbacher always had a connection to nature, but he didn’t fully realize his calling to organic farming until later in life.
“Growing up in Illinois, there are corn fields everywhere, but I didn’t think of agriculture at all,” Maisenbacher said. “You kind of become blind to it because it’s always there.”
He first became involved in organic farming and healthy living in high school when he learned about composting. He and his friends would collect compostable materials — such as coffee grounds and manure — and use it in their backyards.
This year will be Maisenbacher’s second season working at the orchard. The orchard is tucked within Garland’s Oak Creek Lodge against the backdrop of the Sedona Red Rocks. Maisenbacher and his crew silently go to work picking apples early in the morning. A bushel of apples is about 35 pounds. On a good day, Maisenbacher can pick up to nine bushels, about 400 pounds of apples. 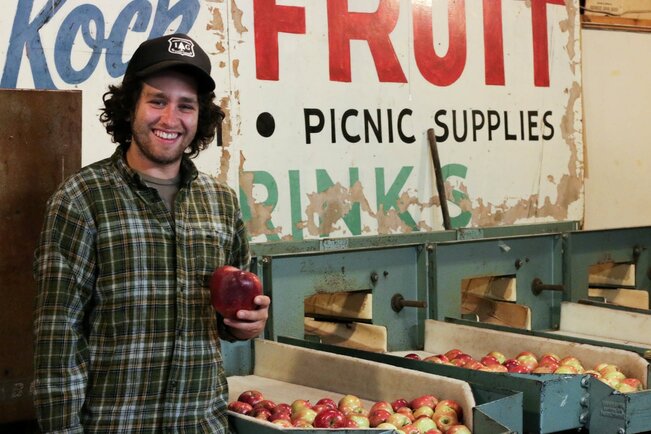